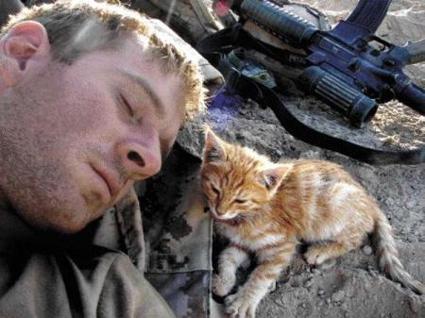 Private Fenner, of Ottawa, discovered his feline companion after a long night patrol in the treacherous Panjwaii district of Afghanistan in late September. When Pte. Jay Fenner scooped the trembling kitten from a busy road as several LAV III’s roared by, the frightened animal stared back at its rescuer and let out an endearing squeak. And that was that — Squeak had named himself.

As dawn approached, the exhausted soldier was ready to rest his nerves when he spotted the tiny orange kitten shaking on the road, mewing. He ran to pick it up, determined not to let it get hurt.

The 27-year-old soldier — based in Petawawa with 1RCR, Bravo Company — offered the kitten some chicken from his rations and set his gun down in the dirt before falling asleep on the ground. Nestled in between Pte. Fenner and his gun lay Squeak — a rare, peaceful moment that a fellow soldier captured in a photo.

For John and Jane Brennan, seeing an image of their son for the first time since he left for Afghanistan in August was a shock. He looked thin and worn, but there was relief that he had found some comfort. At least, they thought, he had a companion to take care of that would take his mind off constantly worrying about his own safety.

”It was so nice to see him. It’s scary when it’s your son out there,” said Ms. Brennan, who also used to serve in the military. ”The cats over there are wild, I’m surprised it didn’t tear him to shreds, but it was probably frightened.” She said Squeak hasn’t left her son’s side since they met. In fact, it’s hard to tell who is more fond of whom. The two regularly shared his rations of eggs and sausage or wieners and beans while on patrol together. Ms. Brennan said her son is worried about who will take care of Squeak when he leaves Afghanistan and wishes he could find a way to sneak his adopted kitten back to Ottawa when he comes home. ”It seems to like chicken, it’s a spoiled cat for living out in the middle of nowhere,” she said. ”It’s beautiful, it’s really very cute.”

Kriget för dem båda slutade så här enligt en annan kort notis:
Both came home safely. Pte. Fenner took shrapnel in the head and neck, so he wound up with the cat (unhurt, of course) in Walter Reed Army Hospital, where he was discharged, no worse for wear, with a Purple Heart. Last I heard they’re still together and doing fine.