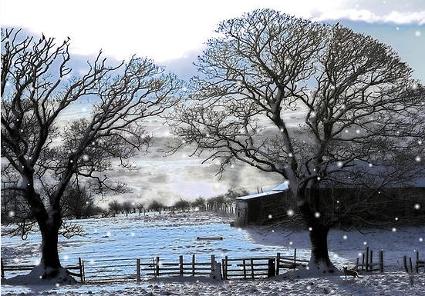 Perhaps if she pushed just a little harder the gap would widen just enough for her to squeeze her way in. She summoned all her remaining strength and was rewarded as the wooden board gave way with a resounding crack allowing her to make her way inside.

Behind her the full moon shone down, its diamond clear light revealing the track of pawprints now frozen into the freshly fallen snow. So many steps had brought her to this place tonight – her journey had been fraught with danger and full of fear.

The little cat had been driven to find shelter by instincts as old as time itself – she knew that she must seek safety for the events yet to come. This had been the compelling force that had brought her through the blizzard – the storm had been relentless with frozen flakes as sharp as needles and winds that had chilled her fur until it stood frosted and unyielding – offering no protection from the bitter cold. Just as her resolve had begun to weaken the clouds had scurried away unveiling the friendly face of the moon whose illumination revealed a small wooden shed almost hidden in the shelter of the silhouetted trees that surrounded it.

Now within the dark interior she paused momentarily, her sharp eyes adjusting to the gloom. Cautiously she sniffed the air; her ears pricked, listening for the slightest sound, the smallest indication of danger…. All seemed safe. Shaking her ice-covered coat she proceeded to search for a place to rest – exhaustion was rapidly approaching, she must be quick. In a dusty corner was a pile of boxes, a little dirty and worn, but just what was needed for her purpose. Pushing open the flaps of the uppermost, she slid gratefully into its confines. There, she quietly curled into a small ball of fur, tucking her nose under her tail for warmth – too weak even to groom herself; she fell into a restless sleep – waiting……

Her short life hadn’t always been like this, once, not so long ago, she had known human kindness and all its security. There had been a home, warmth, food and love – all a kitten could desire. There had been small humans too – they had stroked and played with her squealing with delight at her feline antics. However, as she had grown, their interest had faded – when she rushed to them expectantly, seeking the affection she remembered, she found herself pushed roughly away. Computer games and other toys now held their attention – she was no longer small and cute – just another unwanted accessory in their consumer driven world.

One night she was snatched up from her cosy bed and bundled into a carrying basket – what happened next was beyond her understanding. Terrifying noises, smells and movements surrounded her, then silence. The carrier door was opened and she was tipped out – the noises began again and then faded away. She was somewhere unfamiliar, outside, alone and dreadfully afraid……

She was awakened suddenly from her slumbers by a sharp pain that racked her body, and although startled, she somehow understood that this was supposed to be happening – this was the time she had been preparing for. Sure enough, when eventually the first small kitten emerged she knew exactly what to do and nurtured him and the other three siblings that followed with the greatest of maternal care. There in the darkness was no outward sign of the small miracle that had just occurred but if you had listened very carefully you may have heard the soft, gentle purring of the new mother as she nursed her tiny babies and their minute sounds of contentment as they lay beside her……

“George, you really will have to get started on the Christmas tree soon! It’s well after 9 now and at this rate you’ll still be decorating it on Christmas morning. You promised Lucy that you would have everything ready when she woke up – remember?!”

It was bitterly cold outside now and just beginning to snow again. Large, soft, fluffy flakes drifted slowly down – George pulled his scarf tighter around his neck as he scrunched his way up the path to the shed at the end of the garden. The door complained loudly as it swung open on old rusty hinges, he stamped his icy feet once inside and reached for the light switch. He sighed with relief on seeing the pile of boxes in the corner – he had been worried that the removal men had lost them in transit. Christmas Eve was certainly not the time to move house by choice – but their buyers had insisted they were in for Christmas or no deal!

He gently carried the largest box into the house and placed it carefully beside the majestic fir tree. As he opened the box to begin his task he let out a cry of surprise and delight. “Margaret – come look – you’ll never believe this!” As she stood beside him tears ran down Margaret’s cheeks – “Oh you poor dear thing, you’re so young to be having babies – you’re not much more than a kitten yourself”.

The little cat gazed up at their faces – she had been too weak to run when she had heard the man approach, besides, she never could have abandoned her little ones. So she had lain fearful and silent hoping in her heart that these new humans would not hurt them. As she looked up into their eyes, so full of kindness and compassion – she knew that her wish had been fulfilled and she and her kittens were safe at last.

Later, as she lay purring contentedly with her offspring in her makeshiftbed beside the roaring log fire – she heard her humans talking softly together…… Little did she know that they were discussing the letter that a certain little girl had written to Santa. It only contained one wish:

Dear Santa,
please bring me
a kitten
to love and care for
From Lucy
x x x