You might imagine that a little shelter already filled to the rafters with discarded dogs and cats wouldn’t exactly launch itself into code-blue alert to save a long-shot homeless cat. You’d be wrong. This is the story of a skinny, scraggly, half-frozen cat picked up by animal control during a nasty snowstorm recently at what appeared to be the last seconds of his ninth life. This is the story of what transpired in the critical hours afterward at the little shelter where he was taken. I happen to know this story because it occurred at the Teller County Regional Animal Shelter where I’m a volunteer dog walker. I also happen to know that it’s the sort of thing that happens regularly in really good shelters all over the country. 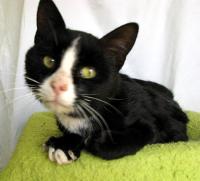 So it’s a Friday morning, frigid and icy, after an overnight storm dumped a foot or more of snow. Animal control receives a call about a cat that may or may not be alive under a deck. The officer arrives, finds the cat is still living but just barely, and transports it over treacherous roads to the shelter. ”Whatcha got there?” the shelter director, Mary Steinbeiser, asks when officer Cheri France arrives and puts the carrying crate on the counter. ”A cat,” France says. ”I’m not sure if it’s still alive.” Steinbeiser pulls the black and white cat, so cold it’s rigid, out of the carrier. The eyes are closed. There’s no movement. This is an awful moment for anyone who loves animals. She steels herself. And then hears the tiniest squeak. The women exchange glances. It looks really bad. But Steinbeiser thrusts the cat at France, who unzips her jacket and presses the cat close to her body, then zips back up. Steinbeiser races off to toss some already-dried towels back into the dryer to heat them up. Over the next few hours, Steinbeiser and shelter workers keep substituting warm towels for the ones that have cooled down, a never-ending relay from the laundry room to the office where they’ve set up the temporary kitty ICU. They inject subcutaneous fluids. A dehydrated cat can’t maintain its body temperature, and this was clearly a dehydrated cat, maybe so dehydrated there’s been organ damage. 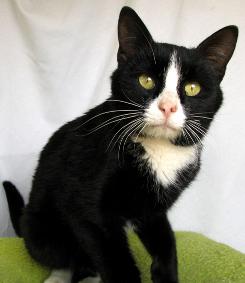 By afternoon, he is stirring a bit when people approach, opening his eyes, reaching out a paw. They substitute the warmed-towel approach with a cozy crate next to a heater. He looks somewhat more alert. But his heartbeat remains erratic. When the day is done and everyone is leaving for the night, he’s not as close to lifelessness as he had been. He’d even licked up a wee bit of wet food, but ”I’m still thinking it’s possible he might not make it,” Steinbeiser says.

The next morning, she gets a phone call from the early person at the shelter. ”He’s moving around!” she hears. He’s wobbly. Real wobbly. And in some subtle ways doesn’t seem quite as solid as he had the night before. So more fluids are injected, they wrap him up again for several hours and cover his cage with a towel to retain the heat and keep his padded recovery unit quiet and private. Each time anyone passes the cage, the towel is lifted and a soft, encouraging word is spoken. By nightfall, it’s clear he has fought his way back again, and he’s determined to not lose his grip this time. He’s purring. He’s eating a bit. And he’s making sure everyone understands that his demonstrated resolve to live is matched only by the boundless sweetness that resides within him. The tension that’s been swirling about the shelter for the last 36 hours dissipates. The staff, a little emotional about the miracle that blew in with first big snowstorm of the season, names him Icee. 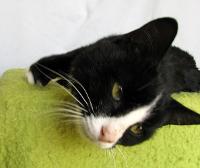 Now the little black and white cat, about 3 or 4 years old, is prowling the cat room, healthy, plumped up, personable and waiting for a home. ”He is,” says Steinbeiser, ”an absolute love.”

He’d probably say the same right back at her.

På TCRAS hemsida finns nu mirakelkatten Icee ute för adoption och han berättar själv: ”Hi, my name’s Icee. I’m one tough and lucky little cat. I was found during a blizzard, so that’s where I got my name. My finders had given up hope and were about to bury me…when I found the strength to meow! Now I’m putting on weight and catching up fast. So I’m a fighter but you can also see I’m a lover too. I just love everyone. If you come to visit, I’ll snuggle in your lap and not ever want to leave. You won’t want me to either!”